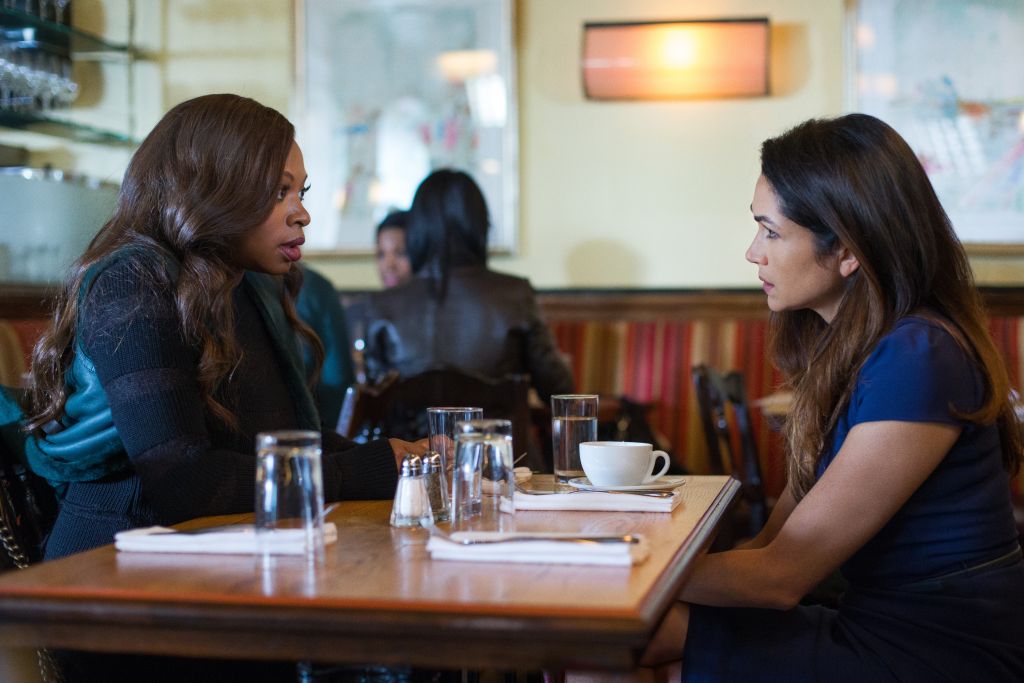 “Tangie?  Chance wants you to be apart of this!  Come on in!”

I fought through the multitude of groupies and made my way to the dressing room door.  When I walked in, there was my man, sitting in his sweat soaked suit flanked by Uncle Charlie and the president of RCA Records.  Chance requested that I come to his side. As I took my place, I saw that RCA was offering my love a four disc solo deal! Chance was trying to remain cool, but he couldn’t keep his hands from shaking! I clutched his left hand while he signed with the other.  Cheers filled the room!  Chance stood and embraced me so tight that I felt us becoming one.  He let his tears of joy fall on my naked shoulders.  Ladies, when I tell you there is nothing greater than seeing your champion get out what he was purposed to do . . . . honey!  Chance was walking through this moment of destiny, head held high, with me on his side!  My only dilemma was . . . . . having to smooth shit out with Kyla.

So let’s get something straight: I’m not one for this therapeutic rapport shit!  I’m not Iyanla. I’m not Oprah. Hell, I’m not even Tametra Tracy! I’m from South Augusta, home of the petty Bettys!  Honestly, I didn’t see the point of having to tell my cheating ass cousin that Chance and I were in love!  I mean, she would eventually find out right? Maybe at the family reunion? Maybe at the wedding? But good ol’ Chance Waters didn’t see it that way.  Dude believed in karma (which is probably why he refused me yesterday). He stated that if we wanted to take our friendship to the next phase, we needed to make sure that no drama was attached.  In other words, we both needed to severe ties with any suitors that we were entertaining.  We were both too old for people to be rolling up on us making a scene while bystanders held up their phone hollering “World Star”!  I agreed. And for some reason, I conveyed that I would inform Kyla of our intentions.  Even when Chance stated that he should be the one to tell her, I told him that I would bear that stress.  Now what the hell was I thinking?! Was it that long, sensuous kiss goodnight that made me feel like I was every woman? Was it the dream of us being the next Ashford and Simpson?  Or was it that fact that I could crush Kyla’s affair by uttering a few simple words?  Whatever it was, I was definitely on cloud nine as my head pressed the pillow.

My mission was clear as my eyes opened to a new day.  I wasn’t going let another moment pass without me being at his side.  Leaving Chance was so wrong.  And reflecting on yesterday’s heart to heart, I could see how he believed I was a gold digger. Truth be told, I was. I was raised to believe that a man should take care of a woman, no matter how much she made. So if I’m driving a Benz and have multiple residences, the average guy doesn’t make enough to take care of me.  I work hard so I play hard.  The average guy wouldn’t have the means to take me to Dubai on a whim! But then came Chance . . . . who only had two suitcases and a dream. Out of all the men I dated, none of them could speak to my soul like him.  This solider of love gave me new life. He saw me for more than my big ass and hair. I was his equal and he referred to me as such. I was his faithful partner in which we shared everything. Without even trying, he occupied my mind, making my body an easy conquest.  He had arrested my heart. That is what truly frightened me. That’s what made me run from him. And now, it was the reason for my return . . . .

It was nine fifteen and nerves were starting to creep up like thieves. I had made plans to meet Kyla for breakfast in thirty minutes.  I dressed in my boxing club attire because our meeting could go sideways in an instant.  You see, although we were cordial the other night, Kyla was a hater!  She despised the fact that I was in the music industry living the life with no kids holding me down.  Before my weight loss, she would always make jokes about my size (like her ass wasn’t a Twinkie away from being me!)  Couple that with the fact that I wasn’t the one for sugar coating shit, there may be a problem today. I didn’t want to cause a public scene. Didn’t need a police officer handcuffing me on the floor.  But more than that, I didn’t want word of an altercation getting back to Kyla’s crazy, jarhead husband.

As I turned the ignition, my mind rewound to yesterday.  I thought about how warm Chance’s arms were. How tasty his lips were in and around my own.  I told myself that no matter what happened, I was going to be with Chance in less than seventy-two hours! That alone made the ride a tolerable one.  As I turned on the exit for Bobby Jones, I started dreaming of Chance and I getting married.  I always loved that scene from the “Love U 4 Life” video. Maybe we could get Jodeci to sing at our nuptials? I’m sure Reverend Run would be happy to preside!  I started getting tingly all over as I arrived at the IHOP.  After parking near the front, I hopped out my ride and skipped into the diner. To my surprise, Kyla was already there seated, waving to me.  I walked over to her calmly, deciding to let her lead the conversation.

“Hey girl! Sit on down! I gotta tell you about the other night!”

I took a seat as the waitress handed me a glass of water and a menu.

Kyla was grinning from ear to ear!

“Dance as in sex right?”

“No, he put on some Ready for the World and we slow danced like we were at the prom!”

“Yeah, it was my first time at the new Sheraton.  There was all this room!  After we slow danced to about three songs, he escorted me to the bed where there were purple rose petals all over the white sheets.  Then he started kissing my neck and the next thing I knew he was laying me down and . . . . honey!  The way his tongue played with my pussy . . . . . . ”

“Nah, we definitely don’t want that to happen!  So how did the night end?  Did you guys have breakfast?  Morning sex?”

I felt the need to egg her lying ass on!

“I can’t remember how it ended!  I came so many times!  Damn!  I think it was four in the morning when we finished!”

“Four in the morning?”

I wanted to laugh out loud, but I kept my composure.  My duplicitous kinfolk didn’t know that I already had the scoop!  Chance told me how she used him like a two dollar whore and made an excuse to leave.

“Damn girl!  He must have been on that blue pill!  I always wanted to fuck a guy on the blue pill!”

“Well it wasn’t the blue pill, but brother was everything and then some!”

The waitress came back to gather our order.  I saw Kyla beaming with pride as she put in her request.  I needed to move this conversation along to get to the point at hand.

“Well I don’t want to rain on your parade cuz, but how are you keeping all of this from Derek?”

“Fuck Derek!  That nigga don’t love me!  Every time I turn around, he always going back into the service to fight!  He don’t ever wanna stay home!  But then wanna keep tabs on me while he’s away doing God knows what!”

“I know, I know!  But its as if he likes going to far off countries.  If I didn’t know better, I’d swear he’s got a side piece in the service too!”

“That’s exactly what I mean!  He’s probably over there stickin’ those young boys, bringing that doo doo dick home to me!”

I damn near spit out my water!

“But enough about my trials and tribulations.  What’s going on with you, Angelica? What do I owe the honor of your presence?”

“Well Kyla, I wanted to come clean with you”

“Well, I wasn’t truthful with you the other night when you asked about Chance . . .”

Her demeanor turned from happy to concerned.

“Truthful meaning?  Is that nigga screwing men too?”

“Well spit it out girl!”

“Remember when you asked if we had sex while we were out on tour?”

“Oh that?  Hell, I knew that you two had a past!  I could see the expression on his face that he didn’t want you to say anything.  He didn’t want to mess up the opportunity that he had with me.  I peeped that!”

“I may be a bus driver, but I ain’t stupid!  Just glad that you were woman enough to tell me outright.  Besides that was then and if I remember correctly, you were busy jet setting with some Laker cat right?”

“But what I wanna know is why are fooling with Chance anyway?  I mean, you’re married!”

“On the real Angelica, Chance is who I should have married.  When he stood me up a little over two years ago, I wanted someone that was nothing like Chance.  In comes Derek and all his fly whips and I’m living the life. Didn’t know the life would come with a man who never wanted to be home. That’s the real reason I’m staying with my moms”

“But still?  Did you tell Chance that you were married?”

“Because he’s gonna find out sooner or later”

Kyla put down her orange juice and stared me straight in the eye.

I sat quietly thinking of my next sentence carefully.  I wanted to be tactful . . . . but like I said before, I didn’t know how to do that.

“Well, when he came over to my place for breakfast yesterday, I told him”

“Wait a fucking minute!  You mean to tell me that you invited him to your place after he’d been with me?  You’s a trfiling ass ho! But I know where you get it from. Your momma was a trifling ass ho too!”

Before my brain could fully process what Kyla had said, my hand and body was already in motion.

Serena would have been proud of the back hand I had just given Kyla!  All the patrons turned to look in our direction. Since I was already standing, there was no need for me to stay.  I took thirty dollars from my billfold and placed it on the table.

“I wanted to be adult about this, but I couldn’t.  Breakfast is still on me”

Kyla rubbed her jaw with a wry smile.  I started to walk away, but she just had to get the last word.

“He’s not yours until he puts a ring on your finger bitch!  So until then, may the best woman win!”

One thought on “I’m His ONLY Woman”