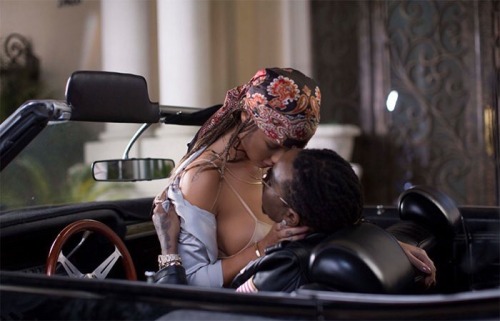 I pulled up my Outlook calendar.  There were clearly no appointments for today.  I was convinced that this was yet another case of Amanda not wanting to deal with our darker skinned customers.  You see, Amanda is my loan officer.  And while she is the reason for bringing in foot traffic with her diamond blue eyes and her medically enhanced chesticles,  she only helps customers that look like her.  Now incidents like this made me wish I hadn’t let go of my previous gig.  But due to Simone stalking me, I had no choice! Plus Chase Bank was offering me twelve thousand more for the trouble!  For that, I could deal with this millennial supremacist. . . . and the fact that she was the CEO’s granddaughter . . . . .

“Two men?  I don’t have any appointments for today.  As a matter of fact, I was on my way out to lunch”

“Well Mr. Howard, one guy looks pretty important!  I’ve seen his face before but I can’t remember where I’ve seen him.  He may be a football player of some sort but . . .”

“Ms. Dimon, what is the gentleman’s name?”

“That’s the thing Mr. Howard.  He wouldn’t give me his name!  He just said that he needed to meet with you and that it was very important!”

I looked into Amanda’s eyes and I could see that she was truly frightened by the unannounced guests.  I kept wondering why this particular visitor wouldn’t give his name?  Did Amanda disrespect him with her ignorance?  Damn if this wasn’t another issue that needed to be resolved! Sigh . . . . . .

I sent a quick text to the young lady that I had planned to meet for lunch.  I informed her that I would need a rain check for today as I attended to work matters.  I waited several minutes for her reply but didn’t receive one.

I stepped out of my office and started up the short hallway.  As I came to Amanda’s desk, there stood two gents.  One guy reminded me of John Coffey from the Green Mile.  The other guy had to be the sharpest dressed cat I’d ever seen!  It looked as if he had stepped out of a GQ magazine in his beige and brown checkered suit.  The diamonds in his cuff links and his watch made me think he was a baller too!  His face was familiar, but I couldn’t place it either. . . . .

“Chauncey my man!  Why you so formal?  I guess it has been quite a few moons since we tore down Memorial Hall!”

The dapper don nudged his rather large acquaintance.  Out of the corner of my eye, I could see ol’ Pete ready to draw his gun.  I gave him a quick look of confidence and he returned to his station.

“You see Rev?  They get a little bit of money and they forget about struggling in Statistics lab with you!”

At that moment, I began to remember who this brother was.

I couldn’t believe my eyes!  The last time I saw Eric was when I was leaving the Caribsa party unexpectedly with a drunk underage friend.

“Small world man!  How have you been?”

“I have a business venture that I would like to discuss with you.  Is there somewhere we can talk?”

“Sure, we can talk in my office”

Eric nodded to his large friend who walked out of the door instead of coming back with us.

“Is your man okay Eric?”

“Yeah, he’s fine.  He just needs to handle something before we begin”

I offered Eric a seat as I proceeded to my own.  While he made himself comfortable, I could see Eric scanning the office until he found my camera. The way he stared at it without speaking to me made me anxious.  I cleared my throat, hoping that he would take the hint. However, he continued to remain silent. . . . which started to bother me . . . .

“So are you just gonna sit there and not disclose this venture that is interrupting my lunch date for today?”

“I’m sorry if I barged in on your plans my man.  It was not my intention.  However, something has come to my attention that I need to address with you.  But I have to make sure that it’s safe to speak in this space”

I could see Eric’s phone buzz while he finished his statement.  He smiled and crossed his leg as he began.

“So how much do you like working at Chase?  Is it paying you well?”

“It’s paying me enough to pay my student loans and not be hurting!”

“Hmmmm.  Well how would you feel about being a bank manager for a Black owned institution?”

“As much as I would like that Eric, that would be a pay cut of nearly twenty thousand dollars my man!  I don’t know if that makes good business sense”

“I hear you my brother, but check this out.  There are several branches here in Atlanta.  I want to expand to Athens and I want you to run it.  And for a little icing on the cake, I’ll pay you five thousand dollars more than what you are making here if you take me up on my offer”

“Wow!  That’s a lot of money for a city that doesn’t have a fifth of the people that Atlanta has!  How can you afford to pay me more than every other manager for Citizens Trust? You won’t be able to justify it to the President or the Board”

Eric studied me with a sinister smile as he made that remark.  How the hell could he afford to pay me all that money, whether on or off the books?!  Athens had some minor drug dealers but nothing major that would turn over that kind of bread!  There had to be some other play going on!”

“Look man.  If you’re looking for me to be the one to clean drug money for you, I can’t do that!”

“Imagine you getting all high and mighty!  Nobody said that you would be cleaning drug money!  We don’t do that over here!”

“So what is it exactly that you do Eric?  I don’t remember business being your major in school?  As a matter of fact, didn’t you leave school and take up cooking or something like that?”

“Something like that.  I’m the owner of the Six”

“Yes it is.  But there’s more to this proposition than banking that I need your help with”

“You need my help beyond banking?”

My blood began to boil over!  It took me six months to get her out of my system! When I told Simone that our affair was finally over, she refused to let me go!  She was showing up at my job unannounced!  Any time I would go on a date, somehow she was always there!  I even found her crazy ass outside of my house one night while my daughter was home!  Her unbalanced actions prompted my move to Lawrenceville.  And that was before the restraining order!

“What about Simone, Eric?”

“Well my friend, you left her in bad shape. That dungeon she was running was apart of my employer’s side hustle.  When you broke her heart, she lost her confidence.  She ran off her clientele and it has left my benefactor high and dry.  To make matters worse, she filed for divorce!”

“It has everything to do with you Mr. Howard!  That dungeon catered to the elite and gave my boss information to make political moves.  Citizens Bank alone should let you know that we are trying to build up our community!  We need that influence Chauncey!”

“So you want me to go back to being Simone’s side piece?  Is that what you’re asking?”

“Trust me when I say Chauncey, you would rather me ask you than tell you!  To me, it’s a sweet deal!  You start laying the pipe to Simone again, and you get paid over eighty thousand a year! It’s that simple!”

“Look Eric, as much as I would like to help you and your “benefactor”, I can’t.  Simone is crazy and I can’t deal with that drama in my life anymore! So thanks, but no thanks”

Eric uncrossed his legs and stood up.

“So tell me Mr. Howard?  How would you take care of your daughter with no job?”

“Nigga are you in my place of business threatening me?”

“No threat Mr. Howard.  I just simply asked a question.  It’s hard to take care of children when you’re not able to provide for them.  Especially when your name is linked to a sexual harassment lawsuit with the CEO’s granddaughter . . . . .”

“I’m just saying Mr. Howard.  The choice you make today will change the rest of your life. Now whether that is for the good or the bad is clearly up to you.  I’ll give you 24 hours to make up your mind.  Here’s my card.  Call me with your decision”