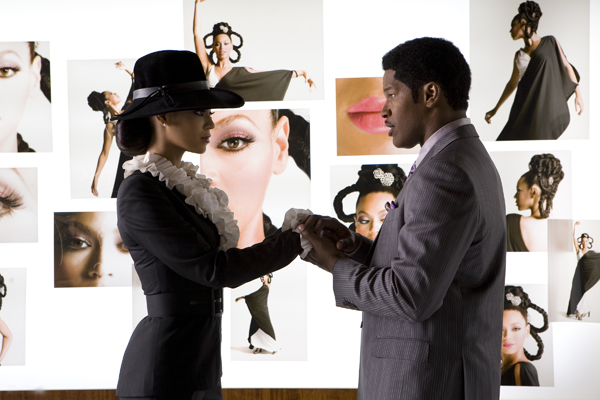 “Welcome to The Six Mrs. Phillips!  I’m Eric Houston, the proprietor of this establishment.  Ronnie has told me so much about you!”

“I was told it would be you and your husband tonight.  Is Mr. Phillips parking the car?”

“I would imagine so with him taking over DCA!  I’ll have the valet alert me when he gets here.  For now, let me show you to your seat”

Taking over DCA?!  Now I knew tonight was gonna be full of surprises!  I had waited ten minutes before pulling up hoping that Stanley would be his normal prompt self.  But still, it was 8:30 p.m. and no sign of my estranged partner.  I hadn’t seen or talked to him since he stormed out of the Varsity that rainy Tuesday evening.  I didn’t want tonight to be the night that Ronnie found out that his parents were separated.  Even at twenty three, I knew the news would tear his world apart.  I wasn’t going to be the one to ruin his dream of marriage.  So instead of taking in the atmosphere as my host guided me through, I prepared lies to tell in the event Stanley didn’t show.

As we neared the table, there was an attractive debutante already seated.  She looked to be a little younger than me, but not by much.  Her hair was laid but her dress looked like it would pop at any minute!  Girlfriend was hella curvaceous but a little too much for that dress!  Then it occurred to me.  What if this thick heifer was Stan’s new lady?  My eyes started going back and forth!  I could feel the anxiety coming on real strong!  She smiled at me as I took my seat.  I took a quick sip of water and exhaled. I was glad that I wore my extra strength Secret and my black cocktail dress!

“Good evening Mrs. Phillips!  I’m Mackenzie Davenport.  I’ve heard so much about you!”

Mackenzie extended her hand but I refused to except.

“I’m sorry Ms. Davenport, but where do I know you from?”

I felt the blood literally rushing through my veins, fueling me as if I was turning into the Hulk!  How dare Stanley bring this puppet in here to meet our son!  This is some unbelievable shit right here!  So this is what he wanted to do to get back at me? Introduce a younger, thicker version of myself? Okay motherfucker, I see you. . . . .

“Why should he?  Are you someone important or just another one night stand?”

The mistress looked at me perplexed.

“Ummmm . . . . well I hoped he would have said something by now!  We’ve been living together for several months”

Did Stanley actually come to the malt shop while he was living with this church side trick?

“Yes, Mrs. Phillips.  I could have sworn Ronnie told you about us?”

“Ohhhhhhhh . . . . okay!  I’m so sorry.  No dear, Ronnie didn’t tell me that he had moved in with someone.  Are you guys roommates or something?”

“I think we’re a little more than roommates Mrs. Phillips.  But I could see why Ronnie didn’t say anything to you guys.  He tells me that Mr. Phillips is a devout Christian minister”

“Yes he is.  And please Mackenzie, if and when my husband shows up, don’t lead off with that.  Ronnie may be an adult, but my husband still treats him like that seven year old boy who’s still learning to ride a bike!”

“Yes ma’am.  I’m sorry.  I’m just a little nervous about tonight.  Ronnie’s been secretive all week and I’m not one for surprises”

“Neither am I girl, but it looks like tonight will be one of those nights!”

Just as my nerves relaxed, Ronnie came to the table.

“Yes, I have.  A pity that you haven’t said anything about her or the fact that you two are living together . . . ummmmhmmmm!”

Ronnie shook his head as he took a seat next to his bed buddy.

“Momma, that was supposed to be a secret!  You know how dad is!  Can you please keep this between us?  At least for tonight?”

“For tonight son, I can.  But the better question is where is the money that I’ve been sending you for rent every month?”

“I’ve been saving it up”

“Wait a minute?  How are you saving up my money?”

“You gotta trust me momma!  I went through a lot of trouble for tonight.  I have quite a few surprises to share with all of you.  Is dad in the bathroom?”

“No ma, I’ll call him.  Sit down and I’ll have the wait staff bring out some wine and appetizers.  Everything is on the house tonight!”

Mackenzie smiled while I sat in disbelief.  Why was my son saving my money?  How was he living with someone and not having to pay anything towards rent? Was this the same kid that was calling me every other week to deposit money in his account for food?  The same child that took three years just to finish his freshman course load?  The same wide eyed boy that’s been working the summer for free?  I needed to investigate.

“Soooooooo Mackenzie, how did you meet my son?”

“You’re gonna think this is weird Mrs. Phillips, but I met your son on campus”

“I met him in my philosophy class”

My mouth dropped open!  I started doing the math in my head.  She had to be at least twenty eight with a Doctorates right?  I stared into her eyes and then looked down at her hands to see if I could get a true sense of how old Mackenzie really was.

“So they allow twenty-eight year olds to teach at Georgia State?”

“Whoa sister!  You’re thirty-six and you have a twenty three year old man living with you?”

Just as I was getting ready to cross examine this uncaged cougar, Ronnie came back to the table with a special guest in tow.

“Guess who I found circling the restaurant?”

My anger subsided as I saw my hunk of a man standing in my presence once again!  He had to be wearing a new suit.  And it wasn’t the typical off the rack suit either!  It was tailored and he wore silver and diamond cuff links on the sleeves.  He smelled like confidence as he took the seat right next to me.  He looked me over and smiled.  I didn’t know if he was faking the funk or being sincere.  Either way, I was happy to see him.

“My apologies for being late everyone.  I got caught up at work and then my GPS had me going in circles!”

“Thank you Cassie.  I’m just trying to keep up with you!  Is it possible that you look more beautiful than the first day I saw you?”

My heart started to swell!  He still knew how to make me blush!  He touched my hand and I thought I was going to faint!  As I grabbed for water to calm my excitement, Ronnie signaled the band.  The piano player moved from his seat to allow a familiar figure to sit in his place.  Mackenzie began to cry as the crowd began cheering and screaming. Before starting his song, the guest singer addressed the crowd. . . . .

“Thank you Atlanta.  I’m here on assignment this evening.  You see, my man Ronnie informed me that tonight was a special night for his lady.  So I decided to jump in my ride and help him out.  Is that alright y’all?”

The crowd continued to scream until the piano began to uncloud the noise.  The balladeer looked toward the crowd before starting his song . . . .

As the spotlight made it’s way to Ronnie and his beloved, it was clear why Stan and I needed to be here.  When Jamie finished the second chorus, Ronnie fell to one knee and pulled out a black box. Mackenzie was beyond words!

Ronnie led Mackenzie to an empty spot on the floor as the band began to play “Adore”.  I could see that my son’s new fiancee was in shock as she was unable to move!  Instead of dancing, she just stood and cried on Ronnie’s shoulder.  Meanwhile, I was sitting at the table wondering what the hell just happened!  My son just proposed to a much older woman that neither Stan or I got the pleasure of meeting before now!  I wanted to be happy for Ronnie, but I didn’t know who this starlet was or what her plans were.

One by one, couples filed onto the floor and began to slow dance.  I was expecting Stan to be steaming at this predicament just like I was.  I was anticipating him to preach about how the age difference was too much.  That our young boy had not transformed into a man just yet.  But he did none of those things.  Instead, Stan stood and extended his hand.

“I know how you’re feeling Cassie, but let’s not ruin his night. We can fuss tomorrow or the next day.  Let’s just enjoy this moment”

I wanted to shout right there in my seat!  With the biggest kool-aid smile, I took his hand and we danced to the remainder of the song.  Even though it was for a few minutes, it felt like an eternity!  I so missed his touch.  His smell.  His strength.  For that moment, I pretended that all was right in the world again.  I wasn’t thinking about repairs to my car or work.  All I could think about was that if God gave me the chance to love this man again, I wouldn’t blow it.  I wouldn’t take advantage of his kindness.  If given the chance again . . . . .

One thought on “When I First Saw You”