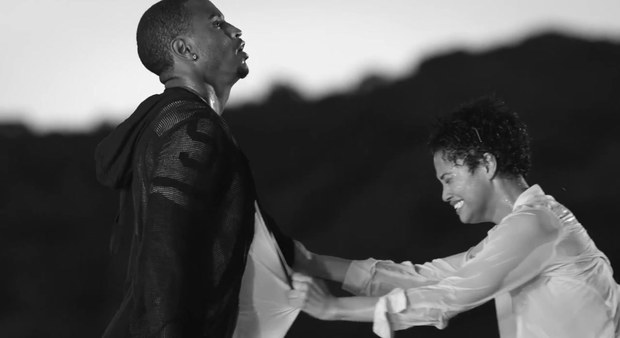 I was a little hesitant as I got out of the car.  This place brought back so many memories! It was an ideal spot to try to talk matters out . . seeing that it was a public place and all. There was no telling what would have happened if we met at the house!  The entrance seemed so far away from where I parked, although it was only a few steps.  While my nerves tried to detain me, my heart propelled my feet up the walkway.  The smell of undergrad filled my nostrils as I pushed the glass door open.  I could already taste the Frosted Orange on my lips.  I plodded a few steps in and there she sat.  God she was beautiful!  The purple sundress made her stand out all the more against the red and white background.  Cassandra looked like the cute sorority girl I met twenty three years ago.  This woman was definitely the epitome of God’s love for me.  She stood to greet me as I came near.

“Stanley!! It’s so good to see you!  Thank you for meeting with me!”

Cassandra’s words seemed so sincere.  She buried her head in my chest as she held me closer than close.  Her coconut oil and Chloe perfume reminded me of better days. With each second, her grasp grew tighter.

“Good evening Cassie.  It’s good to see you too!  Been working out I see?”

She released me from her space.  Giving me that seductive smile, she became my model . . . twirling around twice before taking her seat.

“Had to do something while you were gone.  Things haven’t been the same since you’ve left”

I nodded my head in approval but I didn’t want to dive into the situation just yet.  I needed some assistance.

“Are you eating here?  I think I’m going to have the Frosted Orange”

“You always have the Frosted Orange!  Remember when you said that you would never eat any food here again because they tricked you with their hamburger?”

“Yes, Lord yes! How the hell do you call a quarter size patty a hamburger?”

We laughed as we made our way to the counter.

“What do you want Cassie?  My treat!”

“Well, I was thinking that I would have a Frosted Orange too!  For old times sake”

I continued to look at Cassandra.  Her body looked so inviting.  It had been several months since we last touched.  I couldn’t take my eyes off her thighs, remembering how wondrous they were in the air.

“That I do!  That dress reminds me of the first time I ever saw you”

“The first time you saw me I was in here, wearing my dad’s Army sweats getting ready for exams”

“Yes. I would come to the second service just to look at all the sorority girls and all the ladies that were going to be on line.  I remember seeing you on the second pew one morning.  You were one of the fortunate souls that was able to snag some washing powder when Reverend Hope starting throwing samples in the crowd!”

“Oh wow!  I remember that!  He said that Jesus can wash you whiter than snow!  Almost bust my ass in that dress trying to get some washing powder!  That box came right on time because a sister was down to her last!”

“You were so beautiful that day.  It was fate that we found each other again in this place”

“So where were you hiding at church?  Were you in the balcony?”

“No dear.  I always sat in the very back.  I didn’t want to snore in the midst of y’all!  I never stayed around after service”

Contempt slid on to my face as Cassie’s betrayal began to cloud my mind.  I wanted to fire back but she already saw her error.

“Stan, I . . . I know what you’re about to say.  I know that I broke your heart babe.  I’m sorry.  I’ve been trying to apologize every day since you left but you will never return my text or calls.  I’m surprised that you returned my call from yesterday . .”

“Cassie, I wasn’t going to accept anything you had to say.  Truth be told if I would have responded to your texts, I probably would have called you out your name.  I didn’t want to do that.  I’m trying not to do that now”

I rapped the table and sipped on my dessert before responding.

“Cassie, how would you feel if I had a woman come to our home and tell you that you are not fit to be my wife?  That your sex is not good enough to please me?  How would it feel if you were trying to forget about the half naked pictures that were stored in my phone that I was sharing with several other women?”

Cassandra looked deep into her drink.  I could see that she was attempting to hold back the tears.  She stared into my eyes looking for an answer.

“Stanley, did you ever ask why I was doing all these things?”

“Cassie, I ask myself everyday why you would do some shit like that to me!  I’ve been nothing but faithful to you.  I’m around women daily and never once have I accepted an advance or even entertained another!  You have been the only one!  Can you say the same?”

“Stan, you already know I haven’t been faithful.  I’ve already told you I’m sorry!  I’ve called every day saying that I was sorry!”

“But you slept with another man Cassie!!  You’ve been sucking another man’s dick Cassie!”

The guest that were near our table began to rubberneck at the accident in progress.  My vexation had taken me to a place that I feared.  I quickly took another sip of my milkshake and endeavored to calm down.  I didn’t know if there were any church members in the restaurant or not.  I couldn’t embarrass Bishop with my actions, seeing that I was currently the assistant pastor . . .

Her face was already becoming a mess.  She was trying to keep her makeup in place but was failing miserably.

“Stan, I know what I did was wrong.  I strayed away from you.  But you’ve got to understand, you have a role in all of this too!”

I began sucking the air out of the bottom of the cup as my anger intensified.  How the hell did I play a role in her sleeping with another man?  Did I pull the guy into our bedroom and say “Here dear, fuck this man?”  I didn’t bother responding verbally for the moment. Cassandra was already reading my facial expressions as if I were a teleprompter.

“Stan, for the past year and a half, you’ve been making comments about my weight”

“No I haven’t!  Don’t blame your low self-esteem on me darling!”

“He made you feel special eh? After twenty years, you didn’t know you were special to me?”

“Sweetie, I need you to tell me that I’m special.  Treat me like I am!  If the conversation is not about church, you don’t want to talk to me.  You brush me off!  You stopped texting me during the middle of the day to check on me.  You stopped everything!”

“Well I’m sorry I got promoted to assistant pastor!  Helping to run a church along with the daytime gig takes a lot of time!”

“Wait a minute?!  Are you seriously trying to turn this shit around on me?  I didn’t open my legs and mouth to another motherfucker! You did!  And somehow I’m to blame for all of that? Trick please!”

“I can’t do this!  I thought I could but this isn’t working for me!  You’re not going to sit there and tell me I’m responsible for you being a jezebel! Fuck that!”

I stood up and made my exit.

“Stanley, please don’t walk away!  Let’s talk this out!”

“I’ve done all the talking I’m going to do today!  Goodbye Cassandra!”

I stormed out with fire in my eyes talking to myself.

“I can’t believe that she blames me for her transgressions!  Like I put the dick to her mouth and told her to suck it!  PLEASE!”

I clicked the auto start and hopped in my ride.  I sped out of the parking lot and drove across the way to the that very place I met her.   I cut off the car and sat in the parking lot trying to make sense of what just happened.  The more I attempted to reason, the more it didn’t make sense.  The frustration became so heavy that I started to bang the steering wheel!

6 thoughts on “When She Breaks Your Heart, Part II”