Kanye West started his musical career in Chicago during high school. Afterward, he decided he was not going to college, even though this is what his mother wanted from him. Kanye set out to prove to her he could make his own lane. He started producing for Chicago rappers before getting to contribute on a Jermaine Dupri album. One of the best decisions he made was then moving to New Jersey and getting to produce 5 songs on Jay-Z’s Blueprint album. It was then he had the plan for 4 CD’s entitled: College Dropout, Late Registration, Graduation & Good Ass Job. Those goals were all accomplished in the years he had in his mind when he planned them out, save for Good Ass Job (we’ll touch on that later). Kanye had always been confident, outspoken and on point. His production style was taken from RZA, he would sample classic songs and sped them up so they were a higher pitch.  After that car accident, he created “Through The Wire” in the hospital and recorded it with his mouth wired shut. That got him signed to Roc-A-Fella.

His fusion of semi-gangster rap style and conscious/politically aware rap made a new lane for him: Backpack rappers. A relatable artist but to be clear, he always did music for the sake of showing off. Though as he grew as an artist, we got to know Kanye more. Always one to stand up to pressing issues, he was one to stand up against racism, classism & homophobia. Yeezy showcased many of his thoughts IN ALL CAPS on his blog. The Kanye University blog shut down in 2010 but before it closed its doors for good it was a perfect example of the type of Kanye rants we would see today. They would move from serious or introspective to crazy and narcissistic. It was the unfiltered world of Kanye, with all the ego and clarity. Kanye created GOOD Music and signed Kid Cudi, the man responsible for the change direction West went in when he decided it was time for a change (Also more on that later).

Kanye-to-the has always had a passion for fashion, though his first outing never made it public. Kanye was always caught in his Pastelle Clothing, which seemed to resemble polos with the College Dropout bear on them. He worked on hoodies and sunglasses, getting spreads in magazines and even releasing many blog posts about the brand, but it never materialized. Though Pastelle was considered dead around the time he made Taylor Swift famous, Kanye didn’t miss a beat in moving firmly on to the Sneaker game with the Nike Air Yeezy’s in 2010. At the low price of $200, you could own these shoes which got a sequel in 2012. Ye had collaborated with both Bape (06) & Louis Vuitton (09) on shoes but this was supposed to be HIS venture into his own sneaker. Although Nike might not have felt the same as they didn’t want to hand over royalties so he moved to Adidas in 2014, where he is currently. He has had many a rant about the fashion industry and how he is pigeon held but Adidas seems to be his home now as they helped him in not only the shoe department but put out his outlandishly overpriced clothing line “Yeezus”. But were getting beside the point.

Why didn’t “Good Ass Job” ever come out? What caused Kanye to change his direction? The death of his mother and his fiancé leaving the picture. Kanye went radio silent for a while after her death, and when he came back it was all 808’s and Heartbreaks. Kanye has always been a game changer, like with Stronger when he brought Hip-Hop closer to electronic influences, but this was different. He took ahold of Auto-tune and sung his heart out like he would in the shower. Influenced heavily by the writing of Kid Cudi and full of beats that would influence the style of Drakes first album, 808’s was an anomaly. While kids from the 90’s remember vividly 50cent, widely seen as the end of that era of hip hop music, kids born in the late 90s, early 2000’s remember this album. It influenced all these young rappers who are now so emotional and open (Again Drake, Frank Ocean, The Weeknd).  Hell, “Find Your Love” was a leftover 808 beat. It is one of the most influential pop albums of that decade though it wasn’t a sure shot at the moment. Those losses changed his life forever and the course of his music as well. Since her death, Ye has created a creative content company with her name DONDA and plans to release a mobile game of her making it to heaven.

He returned to Rap with his verse from Jeezy’s “Put On” and eventually stunned everyone with the artistic My Beautiful Dark Twisted Fantasy and instant classic Watch The throne. Then he divided with Yeezus around the same time he got with Kim Kardashian. This cd was heralded by some and abrasive to others. It was literally a coverless disc with red tape on it. Thus, begins the spiral. From there it is one mishap after another. He has literally always been the one to break down and throw a fit. It’s not surprising when he breaks a paparazzi’s camera or yells backstage at award shows. But when his next album was made public after much to do, it was released unfinished.

Some claim that is the point and the disc itself has received high praise. Yet to put out a work in progress is ridiculous for the fans. You finish, you have anxiety, you release it to be heard in whole. That’s the way it goes and that final product is the point. Cheating people out of hard earned dollars on Tidal, releasing singles that aren’t on the album, treating your CD like George Lucas did Star War is off the wall. Everyone will admit that it is artistic to make your album a living breathing thing when most just hand it in when completed. Or is it a sign of uncertainty. Kanye was on that Bullsh!t and at the least, “Famous” was as much a reach for attention as “Keeping Up With The Kardashians”. 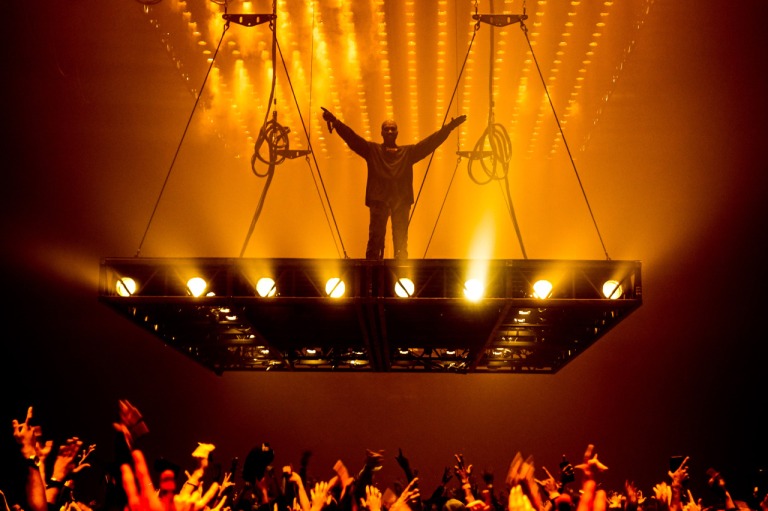 Then comes the many rants on the Saint Pablo Tour. From Jay-Z don’t call & forget Kid Cudi to Kid Cudi is the future and boycotting the Grammys. They have been all over the place but those are nothing new. He ranted to music on the My Beautiful Dark Twisted Fantasy Tour. But it got more unhinged. His wife was robbed, he’s pro-Trump and Jay still hasn’t called him. He spends many days hoisted above a crowd on a floating stage sort of being the Yeezus we know, but the changes are also noticeable. How could our champion be pro-Donald Trump? How could he diss the radio and streaming methods that keep money in his pocket?

He’s currently in the hospital and doesn’t want to leave due to nightmares and visions. He broke down during a visit with his personal trainer and had to cancel his tour. Carried away handcuffed in an ambulance, it is rumored he is collecting the tens of millions in insurance money and is mentally exhausted. Our representative who changed the culture is now past the breaking point. If you prey, prey for Kanye because there is little chance he comes out of this on level ground.