Since Straight Outta Compton was released, a lot has been made about the impact, right or wrong, NWA has had over not only Hip Hop but music in general. On one side you have those that say NWA was responsible for hanging Jesus Christ on a cross on Calvary, just kidding but you do have those that believe that NWA caused the decline in Hip Hop and African American communities in general with their violent, drug and misogynistic filled lyrics. And on the other side you have those that think NWA were doing nothing more than reporting from the sidelines the harshness of not just life in South Central Los Angeles, but in every ghetto. 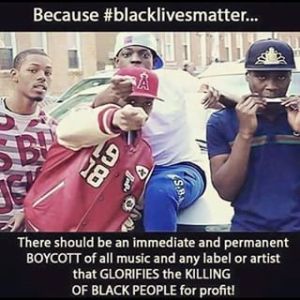 Me, I’m part of the latter side of the equation, but all the hubbub has me thinking abut just what is ignorant rap? I wasn’t aware that there was “intelligent”, dumb, articulate, educated or ignorant rap, I always thought hip hop was multifaceted, I never received the memo that being a Hip Hop fan required me taking an IQ test.

I get it, NWA’s lyrics and others like them were full of things most of us strive to get away from – I myself feel a little guilty listening to Compton Most Wanted, South Central Cartel, Above The Law, Geto Boys, Mobb Deep and The Lox, at the age that I am now. And truth be told, I probably wouldn’t want my children listening to them either, hell my parents did all that they could to keep me from listening to anything that had an “explicit lyrics, Parental Advisory” sticker on it, even though it never worked, they tried.

But as much as I feel guilty when listening to songs like “Let A Hoe Be a Hoe“, “Blowjob Betty“, or “Gang Stories“, I can’t help but think that this is what Hip Hop is all about it, isn’t it? Hip Hop was started in the ghettos of New York and those that were their in it’s inception prided themselves on doing their own thing while not following trends. Rappers in the early day’s were constantly being told that rap wasn’t music and that it was a fad that would last, which I’m sure propelled them to push harder while staying true to themselves.

Grant it lyrics that talk about murdering, selling drugs and pimping may not be a sterling example of the best that Hip Hop has to offer, it does represent Hip Hop’s rebellious nature. Besides artists like Just Ice, Schooly D, Ice -T and NWA rhymed about life as they saw it, which was a break from the norm of partying, bullshitng, or taking out a wash emcee.

But again, this brings me back to the question what is “ignorant” rap? There has always been different styles of Hip Hop ranging from partying, braggadocio, conscious and Gangsta, before Grand Master and the Furious Five’s “The Message” rappers were content partying and going through the world without a care in the world, not concerned about social issues.

After “The Message” rappers started taking note and talked about the ills of the ghetto, while some were happy partying it up, yet I don’t recall them being labeled ignorant while their contemporaries were labeled socially aware. While gangsta rap may be full of negative images and contradictions, it’s no less intelligent than conscious or any kind of rap, just think about it – for some of theses rappers to have made it out of that environment, they would have to have some kind of smarts to navigate the traps that were ever present.