In case you missed it, though I don’t know hot that is possible, athletes are actually standing up and showing, rather than just voicing, their opinions on some of the recent social injustices that have taken place lately. 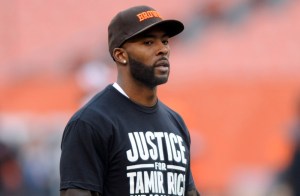 First, members of the St. Louis Rams’ football team, who came out of the tunnel, before the start of a game, with their arms rose in the #HandsUpDontShoot gesture in protest of the lack of indictment in the Michael Brown murder trial.

Then some of the NBAs more renowned players (and a few lesser known), such as Derrick Rose, LeBron James and Kobe Bryant; along with the Georgetown mens basketball team, wore “I Can’t Breathe” T-shirts in response to the announcement on December 3rd, that a New York City grand jury would not indict officer Daniel Pantaleo for the murder Eric Garner.

Additionally, Andrew Hawkins of the Cleveland Browns, wore a T-shirt during pregame introductions of the Browns’ 30-0 loss to the Cincinnati. On the front it read: “Justice for Tamir Rice – John Crawford.” On the back it read: “The Real Battle of Ohio.”

Athletes of today are starting to show that some (not all) care about something that’s more important than the size of the contracts. While this may not be a shock to some, it is to others. In an era where athletes are entitled to astronomical sized salaries, endorsements, and egos it’s easy for some to turn a blinds eye to things that don’t directly affect them.

But what I think is a bigger shock, are those that are vehemently opposed to athletes calling for justice. Namely the St. Louis Police Officer’s Association, who were so enraged by the display of the 5 St. Louis Rams players that they wrote a letter to the NFL demanding the players be disciplined.

St. Louis Police Officers Association business manager Jeff Roorda said: “It is unthinkable that hometown athletes would so publicly perpetuate a narrative that has been disproven over and over again.”

Also, the head of the Cleveland Police Union, who was none the pleased by Andrew Hawkins, calling Hawkins’ actions “pathetic” and even asked for an apology from the Browns’ organizations.

And let’s not forget New York City’s police union, the Patrolmen’s Benevolent Association, demanding its members to ban Mayor Bill de Blasio from their funerals because of recent comments the mayor made regarding racism. de Blasio said, “We’re not just dealing with years of racism leading up to it or decades of racism,” De Blasio said. “We are dealing with centuries of racism that have brought us to this day. That is how profound the crisis is.

To me, this is nothing more than a scare tactic. Or, a bully trying to exert his/her power over those they feel are inferior. If these officers feel offended by the athletes using their platform to call out social injustices, then that’s the officer’s problem!

They don’t seem to have a problem in standing in solidarity when it comes to blaming the victim(s), or trying to do all that they can to shift public sympathy their way. But yet, they want anyone that disagrees with their tactics or how a case is handled, especially if done publicly, to be disciplined or to apologize. If this doesn’t sound like Hitler’s SS I don’t know what does.

The demanding of players to be disciplined, and or apologize along with recent events, further proves how some (not all) police protect others, but serve us.

Whether they know it or not, a call for justice isn’t meant to offend, rather to shed light on what seems to be a growing trend that leads to distrust amongst communities of color and the police. It’s also about people having the right to express their 1st Amendment right of free speech without government interference.

What do you think? Do you think that athletes should be allowed to use their large platforms to speak against what they feel are social ills or injustices? Or do you disagree?