You know, I’m no stranger to ratchet shit and while I am not a card carrying member of the ratchet socialist party, doesn’t mean that I don’t ratchet when I see it. And even though I can’t seem to escape ratchet shit, no matter how hard (that’s what she said) I try that doesn’t mean that I go looking for it neither. So whenever I see one of those cotdamn N*ggas/B?tches be like memes, I instantly think of ratchet piece theater. 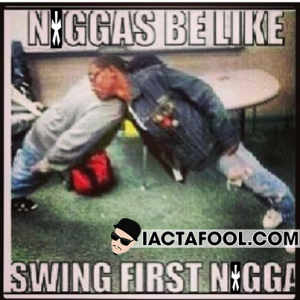 It’s no secret that on the road to riches and diamond things ratchet N*ggas/B*tches do ratchet N*ggas/b*tches things, but now it would appear that they have their own line of greetings, which you can get online or at your local corner store.

Basically if you printed lyrics from every song produced by drumma boy and or quotes from Sheneneh and Wanda you’d have your own line of ratchet inspirational quotes. It’s like these memes are designed to raise the spirits of those that turned “turning up” and “popping mollies” into a noun.

You see the N*ggas/B*tches memes usually represent things that someone who’s basic level of understanding is the equivalent of reciting lyrics by Future. BTW, did you know that Ciara and Future named their child Future? So not only did they name their son after Future’s stage name, but they basically limited his future (pun intended) job prospects to Djing at strip club’s or a Dominoes pizza delivery guy that has lips tattooed on his neck.

While I’m not a fan of these memes, I do find them to be entertaining. And I understand that they represent a segment of the population that companies such as Hallmark tend to overlook with their “I love mom” cards.

What do you think? Do you like the N%ggas/B&tches be like memes? If so, what you make one of your own? And what would it say?