So things aren’t looking too good for Chris Brown. By the way, is it me or does his head look like a dirty tennis ball? Anywho, “mama I killed a man.” It appears that his Leroy from Fame shenanigans might cause him to do some time for living out his O-dog aspirations. With two legal cases pending, it seems that Brown has a bit of an anger problem; one for punching an overzealous fan after words were exchanged and the other for being booted from court order rehab for substance abuse. 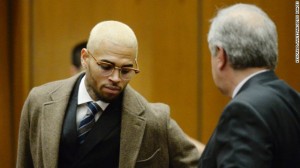 Now, I’m not judging the dude, but I have to say that his penchant for self sabotage is a head scratcher to me. It seems to me that he is hell bent on throwing away everything that he’s worked for. Hell… I wonder if he likes being free. It’s almost as if he is suffering from institutionalization but in reverse.

I mean, you would think that being on probation already for using Rihana’s forehead (you know she has a lot on her mind) as a sparing partner would have learned him and caused his ass to sit down. But oh no, you would be wrong, apparently that was just the catalyst he needed to become a Bad Boy… take that, take that.

I know Brown is human and is entitled to make mistakes just like the rest of us, but how many more times does he need to touch the stove before he learns that it’s hot? He is young but making the mistakes that he’s made doesn’t absolve him of any wrongdoing. Forget making videos of himself pleading for forgiveness. Maybe he should try to get whatever help he needs, stick with it and get some of those un-loyal n*ggas out of his circle, because clearly they don’t have his best interest in mind.

All in all, I really hope that Chris can turn things around while manning up to whatever punishment, if any, is handed down to him.

What do you think? Do you think Chris is too entitled to see the error in his ways? Or do you think that this will be the wake up call that he needs?