Today I’m handing the keys to the castle to reader and veteran Corner Politics commentator Steve Discourse. He wanted to share his thoughts on Macklemore winning the Grammy for Hip Hop Album of the year. Let’s all do like Showbiz and AG and give him a soul clap.

So Macklemore beat out Kendrick at the Grammys. Here’s why you, Mr. or Ms. Hip-Hop head should not be mad or surprised about it. (and why you should stop acting butt hurt about it) 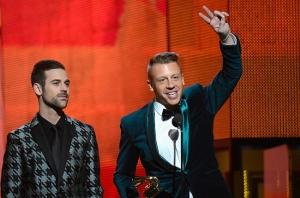 *Let me make it clear right now, so no one is talking shit later (they still will): I liked Kendrick’s GKMC record way better than The Heist, which featured too many indie-rock sounding hooks, vocals and instrumentals for my taste. So no, I’m not saying Mack and Lewis deserved to win more than Kendrick or anyone else, I’m just saying it makes sense and you should stop bitching about it.*

*Oh, and this argument can also be used to show why this year’s Rap Grammys awards weren’t racist either. Yeah, I said it. AND I’m a white guy. Sue me. (we all have very expensive lawyers)*

So here’s my argument, in 2 (long) points, which are really just different angles of the same point:

1. Grammy’s are all about the mainstream
The Grammy’s represent mass appeal in its most basic form, but they also reflect the personal votes made by those who choose the Grammy winners. This means that the Grammy people vote for who and what they like and for who and what makes most sense to them from THEIR PERSPECTIVE. (Read more about the Grammy Voting process here) They don’t hit the farms and ranches in Oklahoma to see what country music artist the people think is really killing the game. And they damn sure don’t hit the neighborhoods where Hip-Hop really lives to find out who has the most impact and popularity among the Hip-Hop community. So the Grammy’s do not represent you, me or anyone else. They represent the mainstream in every way imaginable.

What impact does this have on the Rap winners this year? Well most of the nominees really truly deserved to be nominated and they had the best projects of the year (mostly, except for… never mind). Given what we know about the Grammy’s M.O. (see above, and Fact #2 below), it’s all about mass appeal. Now, I know Hip-Hop heads everywhere will cry up and down that “Kendrick had mass appeal too!” sounding like whiny babies trying to get back the toy they lost. Yeah, Kendrick had a lot of the country bobbing heads all year. But did he really have it as far reaching as Macklemore and Ryan Lewis? Let me tell you a personal example about how far Macklemore’s songs reached, compared to Kendrick or anyone else’s songs.

Throughout 2013 I spent time in Washington State, Northern and Southern Florida (different states, trust me), New England, Washington, DC and South Carolina. I never listen to the radio, but I found myself in rental cars a lot during 2013 so I spent a lot of time with the SCAN button on, randomly stopping at stations for songs here and there until the current station bored me or annoyed me. I heard one, two and sometimes three joints by Macklemore and Ryan Lewis in EVERY one of those regions (Thrift Shop, Can’t Hold Us, and Same Love). I heard those songs on stations from pop music stations to the most strictly Hip-Hop stations, in the country of Northern Florida and South Carolina, in Miami-Dade County, up in the sticks of Maine, in the District of Columbia, and in the other Washington too. I also heard Kendrick’s joints, but not as often, and not as many songs and DEFINITELY not on as wide a variety of stations. Not to mention Macklemore put himself and his brand on the XXL Freshmen cover, the Ellen Show (which got people who NEVER listen to Hip-Hop talking) AND the NBA All-Star Weekend (remember how his song WINGS was on every TV ad?). So which would seem like the bigger song/artist, if you were the average (probably) white Grammy voter, who (probably) doesn’t self-identify as Hip-Hop? Winner: Macklemore and Ryan Lewis. Don’t hate, it’s simple reasoning!

2. The Grammy’s are a popularity contest, not recognition of artistic merit or talent.
We could draw out the endless list of musicians and artists over the Grammy’s history that have clearly deserved awards (according to the regular people and “experts “in those niches/genres, like country, rock, or hip-hop). But let me give two examples. Puffy won Best Rap Album over Life After Death AND Wu-Tang Forever. We all know no Puffy album was better than ANY record from Biggie and definitely not better than Wu-Tang Forever. An example for outside Hip-Hop, Legendary guitarist Carlos Santana didn’t win a Grammy until AFTER he was inducted into the Rock and Roll Hall of Fame as a rock legend. He had to make a huge pop-crossover album with enough guest features to make even rap fans roll their eyes. The list of these stories goes on and on, where critical acclaim and artistic merit are overlooked, at least until that talent also sparks broad enough appeal to get the Grammy people’s attention.

The point is that the Grammy’s don’t care if the Hip-Hop community (and even Macklemore himself) think that Kendrick deserved the Best Rap Album Award, because the Grammy’s aren’t about that. They don’t care about masterpieces or credibility. It’s all about popularity and influence. Yes, Kendrick earned (what seemed like) unanimous respect from “real” Hip-Hop heads. Yes, he made the entire Hip-Hop community sit up and take notice off of Control alone. And yes, Macklemore was met by much of Hip-Hop with doubt, resentment, confusion, hate and more. It’s true that Hip-Hop clubs and DJs and radio didn’t give as much love for Macklemore as they did Kendrick,(or Hov and Ye). Its true Lord Jamar said he didn’t belong in Hip-Hop (hahahaha, HAD TO MENTION IT) and its true that a lot of Hip-Hop really did agree with him, even if they didn’t say so. But the GRAMMYS DON’T GIVE A SHIT ABOUT THAT. We all know the Grammy’s aren’t a group of Hip-Hop heads from the block voting for Rap awards while ministers and choir leaders vote for Gospel awards.

So stop your whining and bitching. Yeah, Kendrick’s album was better, but who gives a shit if he took home a trophy? Maybe only he cares (or maybe not). Maybe just some thirsty ass people in his entourage care. For the rest of us, our lives won’t change and we’ll continue to bump whichever album we prefer, as many times as we want. I couldn’t be happier. So please, “Bitch, don’t kill my vibe.”