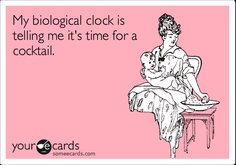 A discussion regarding the looks of our potential offspring was being held at work a few weeks ago, and it naturally evolved into asking everyone who didn’t have any if they wanted children. When I stated that I was looking forward to having babies one day, I got this LOOK from one of my colleagues. It was if he was surprised that it was a thought still lingering in my mind. Then we had this interesting little exchange:

Special Person: “You still want to have children?”

Awesome Me: “Uh, yeah of course. I would love to have a child.”

Special Person : “Oh ok, that’s cool. You still have two years, you should be fine.”

Um, what type of response was I supposed to give to that statement? Agree, and add on that I’m glad I still have some time to procreate? Proclaim loudly to the heavens that I’m lucky enough to have 2 WHOLE YEARS to birth a child, because apparently after that, my baby-making days are over? I just looked at this person with a bewildered smirk, and pretended to be put off by their insensitive comment. The funny thing, I have self-imposed the same timetable on my decision to have a baby, but it’s MY TIMETABLE, and only I can put that on myself…

I, for one, have never heard my biological clock tick. At least not loud enough for me to care. Now, I’m 33, and have told myself for years that if a baby does come out of this by the time I’m 35, It just isn’t meant to be for me. But not because I don’t feel I could have children after that age, I just don’t WANT to. I’m already tired after 2 glasses of wine nowadays, I can’t imagine running after a toddler at 38.

But where does the urgency really come from? Society? Friends? Family? One’s self? I know I’m at the age where most people have children, and many have had them for a long time. I have friends with babies on the way, a 3-year-old and even a high school comrade with a 12-year-old. So I understand why the questions come my way inquiring if I have kids, and when people find out that I don’t the other question is either of the “Why not?” or “When?” variety. However, I am fortunate enough to not have my family and friends hounding me about having children. Just the occasional societal push from an outsider who clearly has no idea that the world really is lucky that I don’t have any children right now. I have, on many an occasion, gone from my bedroom to head to the kitchen, just to get down there and forget what I needed from the fridge. How in the world does someone expect me to keep a kid in check?

I will admit, seeing my BFF with a child on the way does make my mind wander off to visions of an adorable mini-me in little red Chucks and a sundress. I’ve even lingered from time to time over the 33,569,324 pictures friends have put on Facebook of little Timmy spitting or doing something that MUST be deemed hilarious and uploaded YouTube. I’ll look at these photos and videos and think to myself, “Hey, I wonder of I’ll have one of these soon? Maybe I can birth the next Honey Boo-Boo.” And then it hits me that I like my naps too much right now, so if and when I’m ever ready, I’ll know it. The only pressure that should be felt is the one you put on yourself.

With that being said, I just want to let everyone know right now that I am nowhere NEAR having a baby, and don’t see one in the immediate future. I am single, with no love-interest in sight, so I just might miss that 35 deadline I gave myself and my co-worker imposed on me. You never know what the future may hold, but all I see in my immediate future is good wine, mid-day siestas, and the ability to watch everything on my DVR without giving up my remote control to some little person wants to watch Doc McStuffins. So if you see me in the street, please don’t ask me any of the following:

In the end, you never know when your time is coming. And no, I’m not talking about death, I’m talking about having chi’ren. Whenever it may happen, I know I will be blessed, highly favored, and highly frightened. But it’s always going to be on MY terms, and not anyone else’s pushing or prodding me to be preggo. When the time comes, I’ll be ready.

WHO AM I KIDDING? I just hope I have enough time to learn how to make a few more things besides bourbon chicken, french toast, and fajitas before my little people enter this world.

-KEEP IT A HOT MESS